When I saw an electric bicycle for the first time I thought that the guy who rode it was a cheater. I mean, seriously, if you’re riding  an electrical bicycle you’re kinda losing the whole point, right?

As a person who uses a bicycle as a mean of transportation during spring, summer, and most of the autumn I appreciate one of the great things the bicycle is giving me. Namely, a great booty (don’t mind my modesty 😀 ). I can’t hide that being a city cyclist has its downsides as well. Every time you have to go to a meeting, for example, you risk getting there all sweaty and dusty. But when you do the math at the end of the day it’s all worth it: you save money on petrol, taxes, and the gazillion other stupid things you need to pay for when you own a car. Plus you get to exercise without having to fit an hour in the gym on your schedule.

When I tell you now that I thought people who ride electrical bicycles were a fraud, I bet you understand what I mean. I’m still quite unsure if they fit on the cyclist alleys, or if they should ride with the cars. After all, it’s pretty much quite similar to the motorbike, right?

Recently Ellie and I joined a 100km trip in Northwest Bulgaria on electrical bicycles. A quick detour to congratulate the organizers: kudos guys, this is by far one of the best large group trip organizations we have seen!

After we had left the lovely Neptun hotel in Vidin where we spent the previous night Ellie and I joined the group of nearly 80 cyclists. We signed up and were given the cyclist uniform – a funny union suit and a T-shirt each in the minion’s colors. We then “met” our bicycles for the first time. Turned out our idea of what an electrical bicycle is was totally wrong! 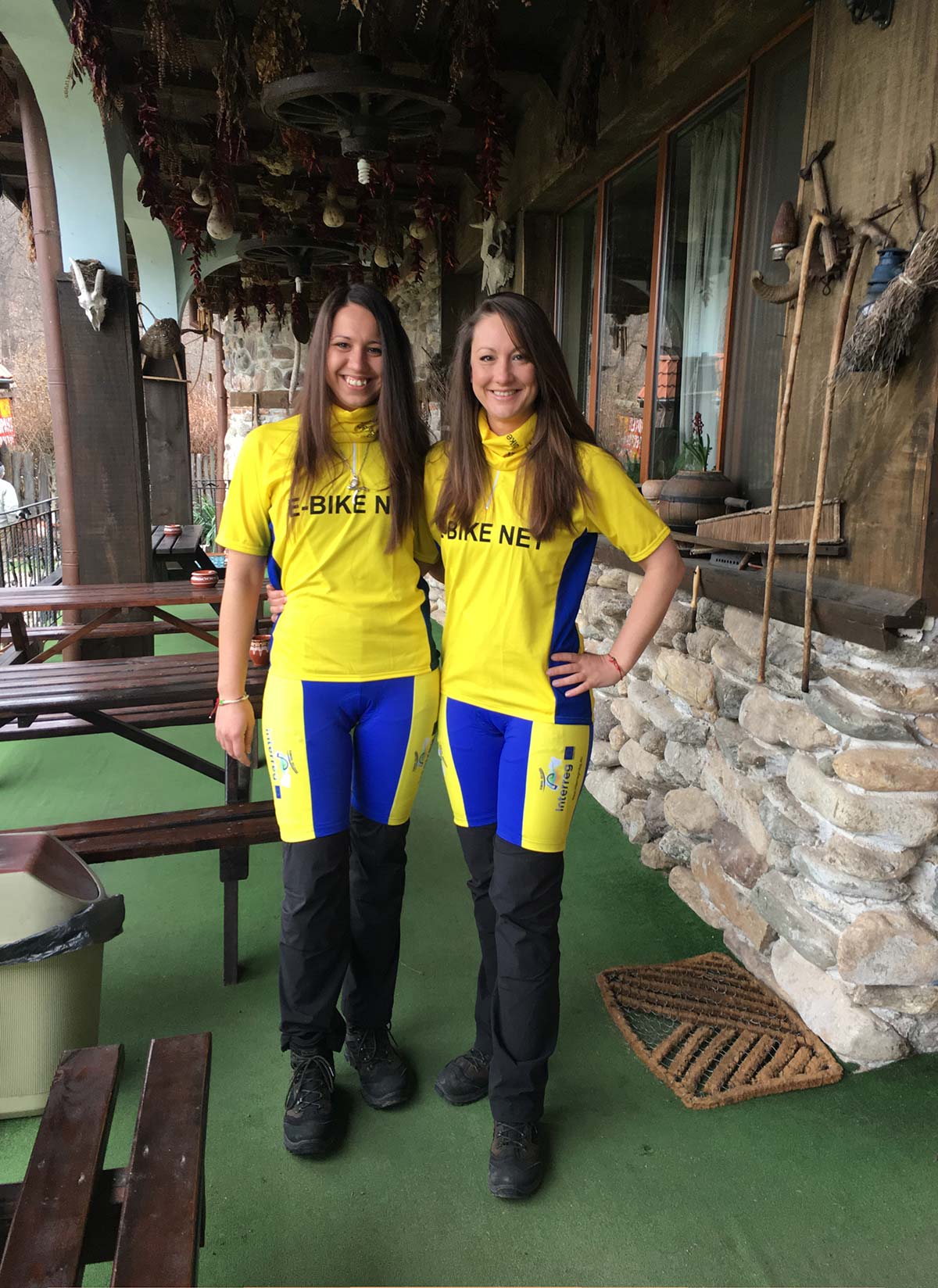 If just like us you think that an electrical bicycle is something which switches between bicycle and motorcycle mode, then guess what: you’re wrong (just like we were)! Here’s how electrical bicycles (at least the ones we rode) work:

How do electrical bicycles work?

Here’s the deal: the battery (which you need to charge) is somehow connected to the bicycle. To get going you need to start pedalling. It won’t happen without it, so don’t count on it being too similar to a motorcycle. When you start pedalling, the bicycle starts moving (mechanical miracle, I’m telling ya!) and if you’ve switched the battery on, you’ll feel as light as a feather. That’s the beauty of the electrical bicycle: it’s an exercise in a way, but without the hard part.

The group Ellie and I went on a journey with consisted of an equal number of​ Bulgarians and Romanians. On the Bulgarian side, it was us, a few other people our age and a bunch of teenagers (the entire class from a local high school). The Romanian group had a much better age variety, including people over 60. All of us were going to pedal for 70km on day 1 and 30km on day 2. This was more or less our route:

The start was extremely easy and nice – we were pedalling as if we were on an exercise bike (the lowest speed possible), yet we were moving  with 20-22km per hour. Our first stop, Lom, was where the batteries were re-charged for the first time. It wasn’t really necessary, yet most of us were riding electrical bicycles for the very first time and still had no clue how to save battery life*.

* Tip: if you need to save the battery on your electrical bicycle you can switch it off when going downhill and turn it on only for the up-hills. This will double its life.

Riding for 70 km and the results

After a quick lunch at the the restaurant of hotel Dunav in Lom we were back on the bicycles headed to our dinner at the Madonna Inn, located in the widely unpopular (yet quite beautiful) Falkovets village. This is when it got all messy. While riding the electrical bicycles was INCREDIBLY fun and we’d certainly do it again (we actually will do it again), I don’t EVER want to ride for 70km in one day. The pain you feel on your butt cheeks resembles sitting in acid after being beaten with a belt for at least two hours. Joke aside, if you have to take two things from this article one of them must absolutely be that unless you’re trained, riding for more than 50km is a very bad idea.

We can’t offer a full review of neither place because we just had dinner in the Madonna Inn (great food & coffee). In villa Kada we only had a quick layover. Nonetheless, the villa was quite impressive. You can check out the video and pics below.

Placing your burning bum on  the bicycle’s seat when you feel like crying isn’t as fun doing as it is perhaps watching. I have to admit, however, that despite the pain Ellie and I were hyped and eager to get back on the road. Looking at the rest of the group, this was everyone’s mood. It didn’t seem as if pedalling for 70 km had gotten anyone tired. Asking around I found out that besides the butt cheek pain (which everyone had) we were all feeling great. Young, old, and people our age – everyone was happy.

When we took off that day you could tell we were all turning pro. The group seemed much more synced and moving as one. The moment Ellie and I totally, madly loved was going uphill towards Belogradchik. At some point both of us looked at the speedometer with excitement. A group of 80 people ages 9 to 60-something were riding uphill with 18km per hour! That’s how awesome electrical bicycles are!

So, are electrical bicycles suitable for everyone? YES!

Electrical bicycles are suitable for absolutely everyone!  Naturally, you should consider the obvious deal-breakers (heart conditions, etc). As long as you can go shopping, however, and carry your bags, you’ll be fine. Electrical bicycles are extremely easy to ride – there’s no sweating and no cardio involved. Mild pedalling gets you as far as a professional bike and years of training 🙂

Where can you find those electrical bicycles?

The trip we took part of was organized by Agency for Regional Development and Business Center – Vidin as part of a project Interreg. The final goal of the project is to create a net of electrical bicycles centres in North Bulgaria. Bicycles will be available for rent and people will be able to browse routes and download GPS trackers to their GPS devices and smartphones. According to the official information, the bicycles will be available by the end of August 2017. Follow our Facebook page and we promise to keep you posted and let you know when this happens!

Special thanks to Evtim Stefanov for making this possible and for his contagious energy and positive vibe during the trip!