Dancing bears. Bulgaria’s shameful past. Something as historically embarrassing as Hitler is for Germany, and as Brexit will probably be for the UK one day.

Dancing bears were a “thing” in Bulgaria back in the late 90’s. Mostly trained by gypsies (99.99%), bears were taken away from their mothers as cubs and trained to dance. How? With its paws well oiled the animal is placed on a pre-heated metallic plate, laid on top of charcoal. With a ring on its nose attached to a chain, the bear is then pulled up to stand on its back feet. The heat and pain make the animal move in a dance-like manner. The bear’s gypsy “owner” would then play violin which eventually trained the bear that with the sound of the instrument, there comes a great pain. So, eventually, the poor creature learned to “dance” on the (otherwise) lovely music. 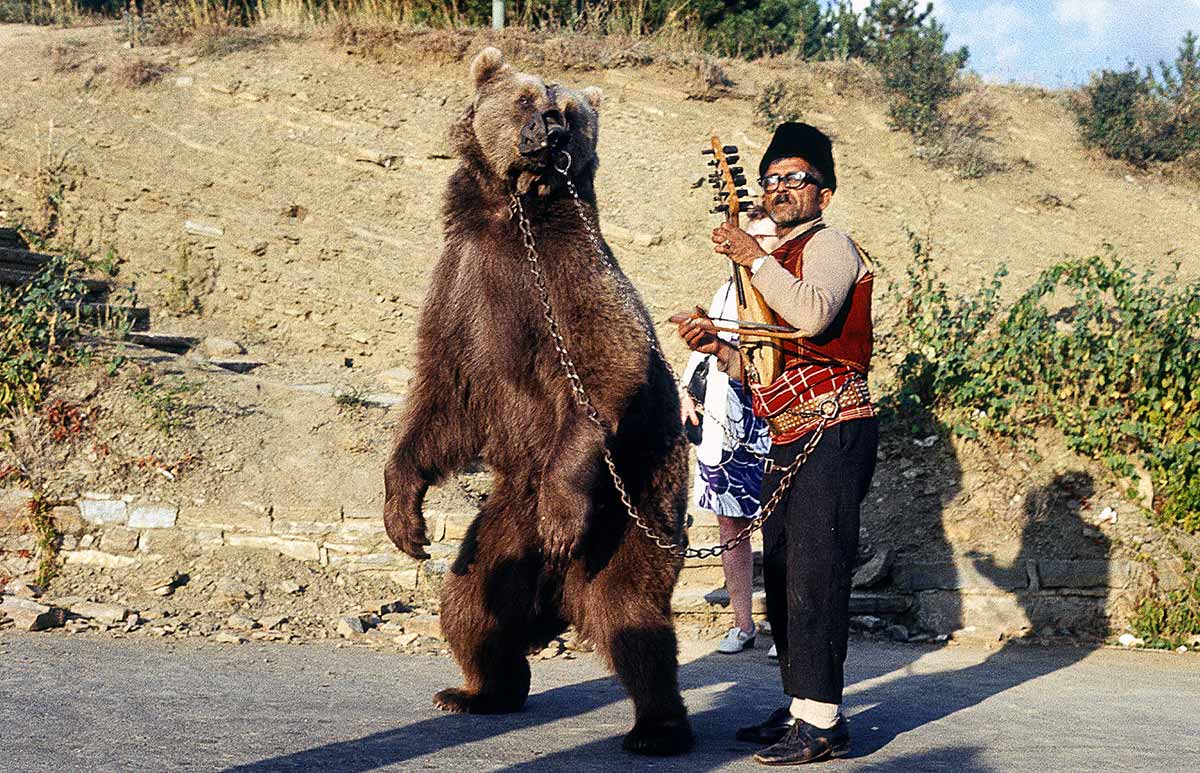 Absolutely disgusting. So disturbing, that when I saw actual footage of what gypsies did to the bears I really badly wanted to make a “Park of the dancing gypsies”. I’d track down the people who did this to the animals and close them inside. Forever.

Nonetheless, there’s a good side to the story. On the 17th of November, 2000 a wonderful park near the village of Belitsa was opened. Initiated by the 4 Paws Bulgaria (and later supported by Bridget Bardo’s foundation), the park is today a home to 26 bears, damaged by people’s stupidity.

You can visit the dancing bears in Belitsa. Quite surprisingly, it feels good when you do. Although we got a good reminder of the cruelty of some people, we also got to learn that the bears are slowly getting better. One of the impressive facts is that most of them are now finally starting to sleep during winter – a luxury they could not afford in the past.

Even though the “dancing bears” were severely hurt by those monsters who call themselves humans (just show ’em to me!), they are now happily playing around in the swimming pools made especially for them. The bears, that is, not the monsters. They’re spending time finding the food that the staff purposely hides in various places. Because of the way the park is made they feel both free, and safe (these bears wouldn’t be able to adapt in the wild so it’s important for them to live in safe areas). They have their own dentist. And most importantly, they are becoming playful and some of them even live with a mate 😉

Some say that it’s all good when it ends well. The good thing here is that no more bears will ever have to go through this. The bad thing is that it happened. But the “dancing bears” park in Belitsa is a place full of hope and love for its inhabitants.

The entrance to the Belitsa Dancing Bears Park is free of charge for now. There is a poll on their website asking visitors to vote for or against an extrance fee and we have voted with a “Yes, there should be a fee”.

There are regular info tours with a guide from the park every 30 minutes starting from the info center. Please do not hesitate to tip the guides – all of them are real sweethearts!

Where to stay when you decide to visit the Dancing Bears park: In the GreenWood All-inclusive hotel in Bansko!

What else to see in the area: The St. Theodor Tiron & Theodor Stratilat church in Dobarsko village

4 replies on “The Dancing Bears Park in Belitsa: a sad story with a happy ending”

There is now a 6 lev entrance fee but well worth it.

You’re absolutely right- 6lev is definitely worth it. Besides, the money go for a great cause!

Thanks for this articles, girls!

We’ll never forget the past and its shame on us, but we can try to learn our lessons and never repeat these cruelties again.

Exactly! This is why it is absolutely awesome that there’s a place like this. The animals get some good care and people can actually see the results of cruelty… I hope this never happens again!