A small confession: although we rarely watch standard TV, Ellie and I are absolutely obsessed with some TV shows. It’s our escape from reality. Our way to switch off everything that’s happening around us and shut down the world for a while. And because TV shows are our “safe net”, we tend to watch only positive things. We fall in love with series which have a strong main character, male or female, that we can relate to and treat as a role model in some area of our lives.

It’s been couple of years now that we have been watching TV shows on any device you can imagine and we came up with our all-time-favorites. Hope you will enjoy the list.

Back when we watched Friends for the first time I remember seeing people trying to copy the life of the characters. And it was great – everyone wanted to have a group of friends that will support her/him, regardless of the situation. My surrounding was learning to accept others for what they are, to compromise, and to stop expecting we will all be the same. It was the first time we realized how incredible the effect of TV is on regular people and I remember hoping all next TV shows be as positive as this one.

A small town full of weirdos, a silver-spoon raised daughter gone “bad” (having a kid at 16), the fantastic friendship between her and her daughter, the search for love, minus the cheesiness of telenovelas, and all that topped with hilarious sarcasm. For those of us who dream of “the good life” this TV show has it all. Ellie and I have done “Gilmore Girls” marathons more times than we’d like to admit. But, who cares – it is one of the greatest TV shows on Earth!

Are you indeed a good person, or do you just think you are? This is ultimately the bottom line in this TV show. It’s about a young aspiring model who dies in an accident and returns to Earth in the body of a darn good but lonely lawyer with a curvy body. The story revolves around the main character, Jane, her best friend Stacy, and the love of Jane’s life – Grayson. Why do we love Drop Dead Diva? Because it shows people with dignity and a court system which has the tools to deliver justice to everyone. Because it shows people who dare to be honest, vulnerable, and forgiving.

A virgin till marriage in the 21st century? Yes! And you know what – it’s not at all as impossible as it sounds. Believe it or not, people can have a life which does not revolve around sex. Besides, it’s hilarious and the narrator kills us! And that’s not all: Jane, the main character, demonstrate an incredible capacity to love and care for others, but most of all: she’s honest with everyone about everything. That’s a quality to admire and although you’ll see her life isn’t quite simple, sincerely definitely makes it better. We wish we could afford to  be as honest as Jane.

Have regrets and wish you could go back in time and re-do some things? Yeah, join the club. Just about everyone I know wishes they could do something differently because that “wrongful” act in the past affected their present. Until about a year ago we actually thought the same way. And then someone recommended “Being Erica” which totally changed the way we see things.

The series are a fine mixture between reality and fantasy. Erica is a 30 years old woman, who suddenly realizes her life is a total failure and just after a breakdown, she meets her “doctor”. The therapy is unusual – it costs nothing, but she has to commit to it fully. And she does, but I won’t spoil it for you – don’t miss this TV show!

Taking you out of the world of romance and friendship for a while, but girls – this one is important. Many people have no clue that the TV show “Lie to me” is based on actual, scientific facts. Well, most of it. Let me elaborate.

In real life Dr. Lightman (the show’s main character) is called Paul Ekman – an American scientist, who spent several years in Papua New Guinea studying the facial expressions of the local tribes. His studies concluded that there are several basic expressions which are innate. In other words – whether you’re born blind or you’re Maugli, you’ll still express your emotions with those same mimics. The thing it that most of those facial expressions are only visible for less than a second, yet they form a large portion of our communication (93% of which is non-verbal).

For the first 2 seasons of the show Dr. Ekman was a scientific advisor and if you familiarize yourself with his work it’s easy to tell. He then quit that position and some of the facts mentioned in the next 2 seasons are largely exaggerated, yet again – quite interesting.

And why should women watch “Lie to me”? Because we often explain our emotions with the words “gut feeling”. According to science, there’s no such thing. What happens is that we actually see those basic emotions on the faces of people and we know when they are lying but we can’t reason it because it happened within less than a second. Fascinating, isn’t it! So, if you want to be able to reason when someone is lying to you, I strongly suggest watching “Lie to me” as many times as you need to, so you can memorize it by heart. 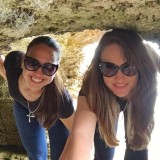 Two sisters madly in love with life, travel, and exploring the stories that make this world such a magical place. Blogging about travel & lifestyle of no drama.